On Imitating the 20th Century Church

“We’re still thinkin’ like a 200-member church.” – Ken Moss, one of my elders, guarding the much needed shift in thinking when your church family grows numerically over 200

“We’re still thinkin’ like a 20th-century church.” – Yours Truly, guarding the much needed shift in thinking when your culture won’t respond like they once did to your church family’s mode of “doing church”

Generally speaking, if you were to study 20th-century Christianity, with an eye to imitate it now in the 21st-century, you would…

…put your primary attention and focus on your Sunday meeting.

…find or build a place adequate to have your Sunday meeting.

…recruit or hire the best public speaker you can find, attract, or afford to preach at your Sunday meeting.

…recruit or hire the best worship leader you can find, attract, or afford to lead singing and/or music at your Sunday meeting.

…collect money from the people who attend your Sunday meeting.

…support and surround your Sunday meeting with good programs for kids to attract families with kids to your meetings.

…spend tons of leadership man-hours deciding what is best, appropriate, most-effective and Biblical to do at and through your Sunday meetings.

…measure success by how many attend your Sunday meeting.

Generally speaking, if you want to imitate the 20th-century church, the above list will pretty much get you on your way.

I need to tell you that I’m speaking (1) as a primary participant in one of these 20th-century modeled churches, and (2) as a human being who is noticing that other human beings do not respond to this mode of church like they used to, and (3) most importantly and urgently, as a dad who is questioning whether this 20th-century model is going to effectively deliver Christ’s way of life to my kids and their friends in this very different, constantly changing 21st-century.

“So often I run into a problem here at my church. I end up doing much research and often come up with  a good and/or unique solution. So I was thinking, if God is going to lead me to these solutions and ideas, I ought to share them.” – Craig Mashburn, diligent and creative minister of technology, and my brother

My little brother is a marvel. He was my personal technology minister in Houston, TX for years, helping me 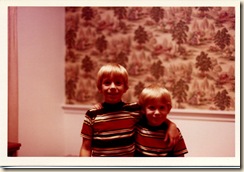 accomplish creative ideas in youth ministry that I could have never pulled off without him.

He WAS my personal technology minister until the church I worked for in Houston noticed. Then they high jacked him and put him on staff full time. A wise move on their part. I was the only one against the idea, because then I’d have to share him.

As it turned out, he could handle my whole load and still handle everyone else’s, too. He loves it and is good at it.

I still praise God that a year later, he did. So I’m still close to some family, but also, I still have my personal techy.

Anyway, if you are one or have any

tech friends, particularly who work at churches, you’ll want to put them onto this blog Craig is starting. Churches offer unique tech problems, and Craig has man-handled a bunch of ‘em over the years, and thought it quite a waste to not “put them out there” to help others directly or spur on their creative problem solving.

Check it out here:

Posted by Brian Mashburn at 8:02 AM No comments:

I’ve had a powerfully intense few weeks. I’m an intensity junky of sorts, so it’s been good, but it has taken it’s toll. A toll I’m glad to pay, but a payment to be paid nonetheless. I commonly experience myself as someone who notices he is weary in spirit way too late. But my kid’s love shook me to awareness early this time in a beautiful and creative way.

As I started home from work, I grabbed my phone and there was a missed call from my wife’s cell phone. It was this lengthy message from my youngest son, Jakin, who is age 6 (read it as if it is one sentence with the cutest little boy voice you can imagine).

“Dad – I just wanted to tell you that I wanted to give you a kiss when you get home, and hug, and I want, um…to tell you…um…because you work good cuz, um, I love you cuz, um, you do good stuff and I love you too much and I want you someday to take to…um…I actually don’t want to go to Chicago for our trip, I want to actually go to where Callie, um, went to and do everything Callie did and I wanna ask, uh, to stay at the same room in the hotel, and, um, if we can, and I want to, um, and someday I want us to go the beach and see some penguins and, uh, I just love you and mom loves you to…when you get home, give her a hug and a kiss…bye.”

I smiled and laughed out loud and played it several more times as I drove home. “I love you too much,” just kept ringing in my head and calming my soul. It was cool.

On the homefront, my wife Carrie has been a trooper with some major pain in her lower back. So when I got home, I took my oldest son Shade to soccer practice, picked up my daughter from gymnastics, then with her back to Shade’s practice till it was over, then home to feed ‘em, bath ‘em, do homework, and get ‘em to bed before my men’s group that meets in my basement starts at 8:30.

While Carrie was coaching me on what to do for lunch prep for the next morning, I saw my daughter Callie (age 7) quietly and intently drawing or writing something on the couch. A while back, she made both me and her mom “mailboxes” out of paper and hung them next to our respective sides of the bed. As I was busily hurrying about, she disappeared and reappeared and informed me, “Daaaad –deeee…check your maaaaail booox.” I smiled with a polite “Okay” as I dashed by and gave her a pat. But after I put them to bed, I remembered, and pulled this out. 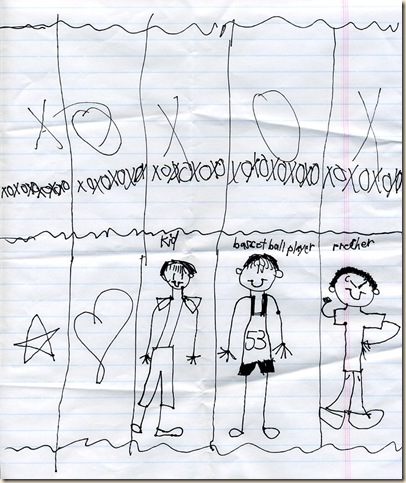 Of course, I love all the hugs and kisses from my daughter, always, but what really captured my attention was her 3-stage representation of my “growing up”. She identified me as a “kid”, then advancing to “basketball player", and finally to “precher”. While I wonder why she chose these particular images to mark my progression, the most affirming thing to me was what she drew to represent “precher”! It wasn’t me standing behind a pulpit talking. It wasn’t my nose in a book (or The Book) studying, and it wasn’t even me with another person shepherding, all of which would’ve been okay and accurate of some of the things she sees me doing. Instead, it seems her image of a “precher” is a strong, intense-but-smiling, determined sort of character who is ready for some sort of action. I tell you what, if this is anything close to what I am being seen as by my kids as they observe me as “a preacher”, then I’m just plain thrilled. Admittedly, some of this comes from my past & current judgments of preachers, oftentimes unfair and false (and yes, it’s not lost on me the divine comedy that God made me one), but still…it was nice, since it is so important to me to not be a “typical preacher” (let the reader understand) that my daughter represented me as a preacher in an atypical way. It just felt great.

Finally, 8:30 rolls around, kids are tucked in, and about 8 of my buddies from the Basement Boys start showing up. Shade (age 9), has a routine of asking me if my buddy Heath is going to come to group, and if he is, then to send him by his room on the way down the hall for him to say hey, because my son loves him. But in the event Heath doesn’t come, he usually names another guy from my group to send in, as a backup. Last week it was Shane, but this week, he told me to send in Chris.

Chris happened to have “the floor” last night, which means, it was his turn to sit in the “hot seat” and initiate the raw and real, hopefully transformational conversation that we all gather in the basement for. So as we all declared it time to descend, and void of Heath’s presence, I mentioned to Chris to make a quick stop in Shade’s room to say hi.

After a few minutes, Chris comes bounding down to the basement where the rest of us are just visiting amongst ourselves awaiting his arrival in the hot seat that we left empty for him. He busts out with a big smile, and then says, “Let me tell you what Mashburn’s son just said.”

Chris said that after he visited with him, he told Shade that he probably needed to go because he was going to talk down in the basement, and added that he was a little nervous. Shade told him, ‘Oh, yeah. Don’t worry about it. You’ll do good. I’ve done it before. I’ve talked in front of the whole church. You want me to tell you what to do?”

“Sure,” I imagine Chris saying in a very Chris-inviting way.

“Just pretend, while your saying what you need to say, that all the people aren’t even there.”

Shade added, “Except my dad.”

Chris was beaming in the basement, for me I think, as he said that it was exactly the way he would want his son to talk about him! He said that it was said in a manner that communicated, "No need to pretend my dad’s not there. You’ll want him there.”

It wasn’t until this morning that I put together this trifecta of child-delivered, massively-meaningful, attitude-changing, energy-fueling, uncontrollable-smile-producing, peace-giving, not-common-at-all daddy affirmations all happened yesterday, densely packed into a mere 3 hour block of time.

I didn’t know it at the time, but now looking backward, and looking inward, I’m pretty sure it was a little gift of fuel to propel me forward that came from upward.

I instantly thought about blogging about them, sharing the experience with all of you, when I quickly realized how extremely self-exalting it is for me to record and publish just how great I’m coming across to my kids.

So I decided not to.

I did share it with my close friend Doyle, and somewhere in the midst of the thrill and joy of it all, I changed my mind. I had to record it, and share it, not because I think I’m “all that”, but because of the sheer depth at which my children’s honest and spontaneous affirmations of me as a dad satisfies and affirms my soul.

May I never short change my short time with my kids. And may their gracious perceptions of me become true as I am becoming truer.

And may the same be so for all you.