I just arrived in my office after an action-packed breakfast at McDonald’s with my youngest son and best buddy, Jakin, who turns 6-years-old today.

Jakin has a habit of getting up out of bed “one last time” pretty much every night in order to “just say one more thing!” If we can get over ourselves wanting him to get back in bed and go to sleep, it is always hilarious.

Once, as his mom started rebuking him back to his room as his head poked slowly around the corner, he retorted with “I just have one more question!” His mom conceded, asking what it was. Relieved, he stepped into the room and busted out, in all seriousness, with “How can dragons fly when they have those small little wings and big huge giant bodies?” I could see all over his face that he was in his bed really losing sleep over this impossible dilemma. 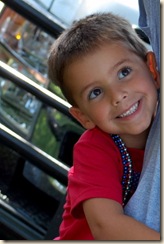 Another time I heard a little shuffling in the hallway. I let out with one my standard “Go back to bed!” shout outs for whichever one of my little hoodlums it may be, which is usually followed by some quick little retreating footsteps and a door quietly closing. But out darted Jakin announcing that he HAD to tell me “One of my favorite things!” I agreed, and he excitedly proceeded to hold up his hand and announce, “On your hand, you have 4 fingers. But when you add your 1 thumb, its like you have five, but you don’t, because you only have 4 fingers, then you have 1 thumb,” and then looked at me, satisfied that he had cleared that up so excellently for me. I said, “Is that it?” “Yep,” he said, as he turned with certainty and bounded to bed.

Another time it was a question: “Is Beansborough a real state?”

I have no explanation. But it got us both in one of those rare-but-priceless places where you really need to, but you can’t stop laughing. You know, the kind that comes out causing pain and tears you are laughing so hard. Almost like your body is taking what only deserves a small chuckle and using it as an opportunity to hold in weeks of repressed laughter to finally purge itself.

Jakin is capable of creating that often. 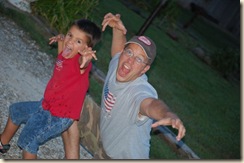 Here’s my favorite to date: the kids are all down, it’s quiet, and I was in my bedroom which is down a long hallway from Jakin’s. I was lying on my bed quietly watching TV when in came Jakin dragging his lifeless lower body, presumably all the way from his room, with his arms. As he slowly pulled his comatose legs around the door frame, he announced, “Dad. I got somethin to tell ya. My legs don’t work.” I looked at him knowingly. I said, “Well, Jakin, your in luck. Your supposed to be in bed sleeping. And you don’t need your legs for that. Right?”

“Right. Okay,” he said, and he pulled himself all they way back down the hall and into bed (he seemed to have made a miraculous recovery by the morning, by the way).

Jakin’s first name comes from a midnight wake-up call I felt like I got from God one night. I drug myself to my prayer room and did one of those open-the-Bible-and-read things. I opened to an obscure passage in 1 Kings 7 where it describes the (boring) details of Solomon  constructing his palace and stuff around the Temple. I thought, “surely this is not what you woke me up to read, God!” I persevered through really interesting (not!) records of some of dimensions of some of the bronze-works that Solomon had commissioned. And then, right in the middle of this, a strange thing…the scripture pauses right after mentioning these 2 pillars made for either side of the porch of Solomon, and takes the time to give these pillars names. One was named Boaz (which means “God’s strength” I think), the other was named Jakin. I looked it up, because all my wife and I had discussed was we might want a “J” name (dunno why). It means “God establishes.”

Jakin’s middle name, Major, was the maiden name of my wife’s sweet Nana, who had just passed away when we found this name. Major means “greatness”.

So when this cool kid was born we named him “God Establishes Greatness”.

So, Happy Birthday, Jakin Strongman (one of his many identities…check out the video here, if you have Facebook, and watch the video “Greatest Fight on Earth” to see why)! I love you and am so proud to be a front-row witness of the greatness that God is so firmly estbablishing in you!

I love you, buddy.