The day started the evening before, really. I was at Harding University, my alma mater, having just finished an "Evangelism Training/Discipleship Seminar" (www.lineofdeparture.com) for some students, teachers, and elders in and around Searcy, Arkansas. I have lots of friends at Harding, primarily former students of mine from the youth ministry in Houston, and also some students from Amarillo where I am now. I had been verbally "throwing out" my desire to go out to a place called Bluff Hole on Sunday morning quite liberally to them all. I was looking to jump into the water below...a thrilling experience that I partake of every time I return to Arkansas. I was fishing for the interested friends who might accompany me.

Upon hearing me talk about it, some of my friends got quiet, hoping I wouldn't ask them to come, wanting to avoid saying 'no'. Others shamelessly wrinkled their eyebrows, and said, "No!" with a little hiccup in the middle of the "o", as if their answer should have been overtly obvious and self-evident. They thought of the cold, the craziness, their current Sunday morning plans or desires...and it didn't sound attractive to them at all. Understandable.

But 3 people's eyes got big. And upon my speaking it, each responded with some version of "Can I come with you?" I told them I'd let them know later that night if it was going down.

So Amanda (who brought her extra appendage - her camera), Coulter (who brought a pair of old shoes for me to jump in that he didn't mind getting wet) and Heath (who provided the car) and I called each other late Saturday night and secured our Sunday morning worship plan. Amanda, Coulter and I were to meet under the overpass behind the Heritage Inn and Heath would swing by and pick us up for church.

We stopped at a convenience store where I purchased everyone a nice cold refreshment of their choice, and a small bottle of Welch's Grape Juice and some bread.

The drive was fun and lively, the atmosphere charged with a hint of anticipation and adventure. For me, it was an emotional celebration of the past...by emotional, I don't mean intense feeling. It's just that I have made this drive a hundred times, and each familiar site was strangely comforting and exciting. It was also a relational celebration of the present...to have the likes of Amanda, Coulter, and Heath as friends and fellow followers of Christ is enough to make any man very, very rich. For those of you who know those three, you know that I'm telling the truth. When you speak to them of God and God's things, deep calls to deep. And it was also a faith celebration of the future. We were going to this particular spot on the planet at this particular time to express how we don't live exclusively for or in this place and time. We believe in a Kingdom that transcends this life and these bodies. And we unabashedly use this life and these bodies to show people (and remind ourselves) that we belong to the Rule of a Great King, we live our lives in the context of a Great Story, we have faith in an Unseen and Glorious Future...and we were going to live in that.

We made the semi-difficult climb to the top of the bluff. 3 out of 4 of us have jumped from this spot into the water below before. I was the only one planning on doing it on this cold day, but the magnitude of the thought is enough to bring a measure of silent reverence and awe-filled staring...with a nervous smile breaking across your face at the thought.

And that's what happened. After all the "oohing" and "aahing", laughing and joking, we all ended up silent. Heath was sitting on a ledge comfortably, Amanda was standing off the to right looking out over the beautiful scene before us. Coulter was on one knee to our left. I was still on both feet, but squatting with my elbows on my knees. It was a completely unscripted, natural "call to worship".
I asked, "How is Jesus, and life with him, like this bluff?"

Heath spoke first of the "leap of faith". Amanda spoke of the "life that comes when your life or death is not in your hands anymore". Coulter and I added our thoughts to the dialogue, and I would be doing a disservice to the profound ground the 4 of us covered by trying to repeat all of it here. Suffice it to say, it was beautiful and inspiring, and Jesus Christ was the hero on that bluff in the hearts of 4 of his disciples.

It got quiet again. Thoughtful. I realized then that even though it was 28 degrees out here that none of us were impatiently shivering. There was no wind to speak of and I silently thanked God for such grace so that we didn't feel rushed at all because of the temperature.

The silence was broken when I picked up the plastic bag, pulled out a loaf of bread, broke it and gave half to Coulter, who broke it and gave half to Amanda. I did the same with Heath. We ate. Then I twisted the top off the Welch's and we passed it around a few times and enjoyed the sharp taste of grape as we looked back and forth between each other doing so and off into the distance (I guess we were a "one cupper" fellowship this morning). 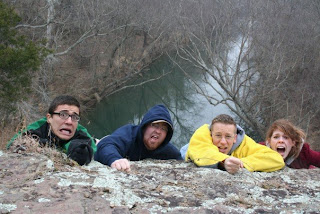 We all smiled as we knew what was next. Amanda spoke first wanting to take a posed picture of the 4 of us looking like we were hanging on for our lives above the cliff. She was right, it turned out cool.

Then I started stripping down to the swimsuit and t-shirt that I had on under my clothes. Amanda and Heath stood behind me on the bluff, Amanda with her camera ready to start snapping. Coulter whips out a cool treasure...a camera that can also take digital video. He climbs down and around to a lower ledge below us and is going to video the whole thing (it's one YouTube).

Was I nervous? Always. Did I have 2nd thoughts? Usually do. Was I afraid? Yes. Did I have good and unique reasons to not jump this time? Absolutely. Would anyone have thought me chicken if I didn't jump? Not in this crowd, and what of it if they did? Was I tempted to decide I might be getting too old for this (I had just turned 39 the day before)? Sure.

But did I jump? Yes. Check it out.

I know everyone has their own tastes concerning worship service. But this was the best one that I've attended in a long, long time. 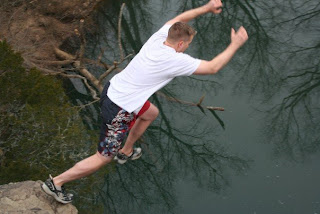 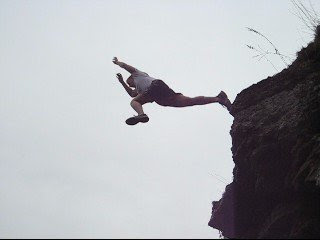 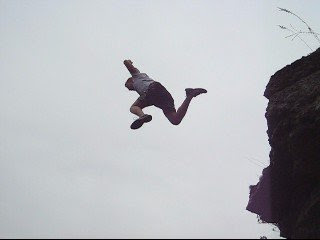